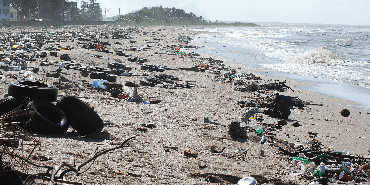 Ocean Cleanup: The Need of the Hour

Global warming has been a looming issue, and it's getting larger by the day, with consequences for the nature all around us. One of the major concerns that environmentalists have been raising their voice for is the health of the ocean.

We all know that 75% of our Earth is covered with water, where 70% attributed to the world's oceans alone. The increase in greenhouse emissions and CO2 in the atmosphere has been a major contributor to pollution in our oceans.

Why are oceans so important to humans?

You might wonder why oceans, which are full of saltwater, are such an important resource to humans. While its salt content means the ocean water as such may not be a good option for our agriculture and drinking purposes, they still play an important role in our climatic conditions.

Clearly, oceans are a critical part of our ecosystem to survive and sustain.

There is no debate that human activity on land is threatening the oceans and the world's marine population. There have been a lot of changes in the ecosystems of the oceans and oceanic circulations in recent years owing to these land-based activities, which constitute nearly 80% of the reason for ocean pollution.

How are humans directly harming the ocean?

And there are more.

Before we delve into how ocean cleanup can be done effectively, let's take a look at the possible consequences we face if we do not take immediate measures.

From providing sustenance to driving our economy, the ocean has plenty to offer in every aspect of our lives. It is our duty to protect our oceans and to keep them clean as we need them for our survival.

What can we do?

There are already organizations involved in removing the debris from oceans and cleaning up the seas all over the world. However, there are a few small actions that we ourselves can take now to keep our oceans clean:

By making simple changes in our lifestyle, we can easily conserve water and preserve our oceans.