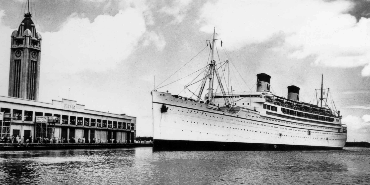 The Cruise Industry � Then and Now

When we speak of cruise ships, the first name that pops into our minds is that of the Titanic. It was probably among the first of the ships to offer a luxurious place for the vacationers. Since then, the cruise industry has come a long way, with cruise tourism being the most popular choice for a holiday. If you look at the revenue generation of the cruise industry globally, it is the fastest-growing sector right now.

The first of the cruises date way back to the 1800s. The RMS Britannia was among the first of the ocean liners to be launched in 1840 with a capacity to carry 115 passengers. While sea tours started as early as 1818, the first pleasure-based cruise happened in the early 1890s. Albert Ballin takes the credit for the same who was the first to bring in a concept of floating hotels, which advertised luxury on the water to gain an advantage over the hotels on land.

The luxury was further heightened when the shipping companies improved the amenities onboard, and the ship speeds also went up with time. Titanic was not the only cruise ship during its time, but rather it was a part of the trio of ships that featured swimming pools, grand staircases, private bathrooms, Turkish baths, and more. In fact, the SS Paris in 1921 featured the first-ever movie theatre to have onboard the ship.

With the arrival of air travel, cruise tourism as we know it today did experience a slight slump. But with luxury liners gearing up in the oceans, the industry revived in later years across continents. Air travel was faster, and in the period after the Second World War, the ocean liners found it difficult to meet the operating costs. This is when the industry reinvented itself, and thus came the birth of the cruise industry that we know today.

Ocean liners were transformed into cruise ships with modern interiors. The best example would be Queen Elizabeth 2, which has the look of a yacht and features plush furnishings and plenty of luxury in it. Thanks to the show “The Love Boat”, the cruise liners were no longer looked upon as the dream for average people, but rather a reality for everyone. Cruise ships became more of a destination than a means of transportation. Cruises were beginning to appeal as a vacation in itself.

Luxury is the word

With vessels built, including the state of the art amenities, the cruising industry has become the most intensive and rapidly growing sectors in the world. From being a small industry transporting passengers, the cruise industry has evolved into something more than just a ship. It now features casinos, shopping programs, spa services, port lectures, corporate conferences, shore excursions, and much more.

It was in the 80s when the mega-ships were introduced like the MS Sovereign of the Seas with a capacity to hold 2850 passengers. Today there are many bigger ships with the capacity to handle nearly 5000 passengers with 18 decks and amenities like boutiques, water slide parks, IMAX theatres, rivaling the vacation on land.

Of course, most luxury liners do not carry over 1200 passengers to make it an exclusive deal for those who travel with them.

As with every other industry, constant evolution is the way to survival for cruising as well. With more and more competitive luxury liners on the water, companies are now looking to hire savvy designers to make ships that are more appealing to consumers. While more and more big ships are entering the arena, the smaller luxurious cruise ships are equally playing up to the competition. There will be more focus on river cruises, and we can look at more exotic destinations to be added to the itinerary.