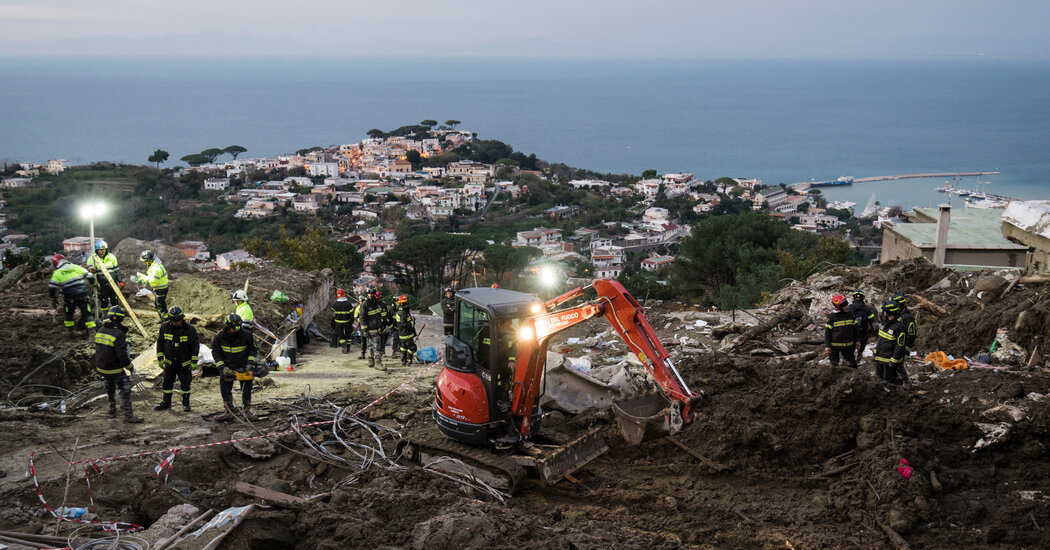 CASAMICCIOLA TERME, Italy — A bulldozer paused and everything went silent in the night as a firefighter, spotting a pink sweater in a generator’s light, reached into the mud-caked debris. This time, it was only a sweater.

Torrential rains last weekend sent a powerful landslide plowing through Casamicciola Terme, a port town on the southern Italian island of Ischia, killing 11 residents — including a newborn baby and two small children — and washing away houses and burying streets. This past week, rescue workers and volunteers continued to dig for survivors and to unearth the town from under thick rivers of mud.

“I was born here and can’t remember anything like this,” said Filippo Martira, a 53-year-old hotel worker, covered boots to hat in mud, as he helped clean up along what residents call Via Lava because it has served as a gateway for the mountain’s regurgitation for centuries.

But as some evacuees came back to search for their belongings, many felt an unwelcome scrutiny from a nation that was asking whether the island’s abundance of illegally constructed houses had increased the vulnerability of a town that sits in a geologically fragile zone across the bay from Naples.

The authorities have not clarified which buildings, if any, may have been illegally built. But a series of amnesties over decades from various Italian governments may have rendered most of them legal in any case. That has set off hand-wringing among politicians, including the far-right party of Prime Minister Giorgia Meloni, and a bitter round of finger pointing over who was to blame.

“We have no zoning plan since the 1960s,” Vincenzo Capuano, 64, a town resident, said as friends emptied his basement of mud one bucket at a time. “Politicians have never decided where residents can build here. There is no way to build legally.” 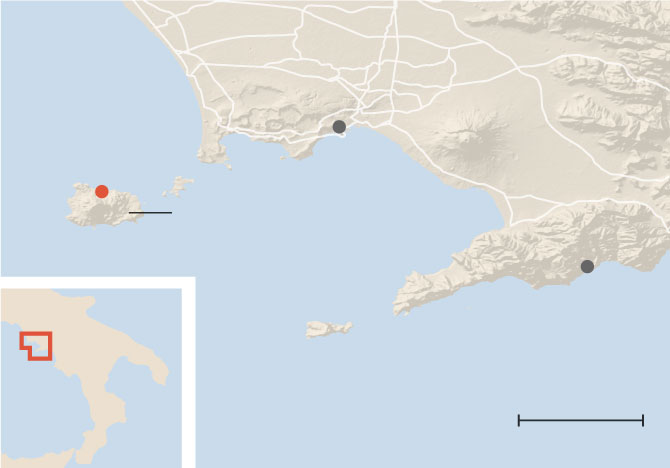 Illegal construction has blighted Italy’s coastlines, hilly landscapes and cities, but the practice is especially endemic in the poorer southern regions, including Campania. On Ischia, an island of 63,000 famous for its thermal baths, 27,000 requests for amnesty on illegal works are pending, from altered windows to entire homes.

Italy has a long history of condoning these illegal constructions, and the anticipation that another amnesty will always arrive has prompted offenders to keep building illegally, marring some of the country’s most pristine beaches with shoddy, and unsightly, homes.

In 1985, Bettino Craxi, the prime minister at the time, introduced a large amnesty for illegal buildings. Silvio Berlusconi, now a member of the governing right-wing coalition, expanded the amnesties when he was prime minister in 1994 and 2003. He allowed residents who broke zoning rules, constructed illegal houses or added entire wings to their homes to pay a fine in return for regularization.

Then in 2018, Prime Minister Giuseppe Conte, the leader of a hard-right and populist government, passed a custom-made measure for Ischia — slipped into a law ostensibly to speed reconstruction of a major bridge that had collapsed in Genoa.

The policy seemed a political win-win, popular with voters but also providing some extra cash for Italy’s coffers. But it has now left Mr. Conte and his increasingly leftist and southern-based Five Star Movement scrambling to defend themselves, with legalistic explanations.

“A political analysis should not revolve around the word ‘amnesty’ in that decree,” Barbara Floridia, a Five Star senator told Parliament this past week. “It does not mean that there was an amnesty. I am against the mafia and, in this sentence, there is the word ‘mafia.’ Does it mean that I am for the mafia?”

Ms. Meloni’s Brothers of Italy party voted in favor of Mr. Conte’s amnesty measure when it was in the opposition. She has sought to avoid the amnesty issue, focusing on climate change and hydrogeological risks, and earmarked 2 million euros ($2.1 million) in aid to the island.

Liberal opponents of Ms. Meloni, who are also wary of Mr. Conte’s increasing popularity on the left, have seized on the issue as a way to hurt them both.

“We need to take an example from this event and never allow amnesties again,” Enrico Letta, the secretary of the Democratic Party, which voted against the measure in 2018, said this past week. “Illegal building practices have unfortunately played a role in Ischia.”

Bruno Molinaro, a lawyer in Ischia who is an expert in construction amnesty, argued that most of the applications in the town were for minor changes and that it often takes decades for homeowners to get a response.

Some have been pending for 37 years, he said. Municipalities tend to avoid examining them because once they discover that a building is noncompliant, they have to take it down. That is expensive for the town, and owners rarely pay back demolition costs.

Taking down so many houses, he added, would prompt a rebellion, in Ischia like elsewhere in the country.

“Everybody in Ischia, and in Italy,” Mr. Molinaro said, “tries to make a place in the sun for themselves and their families.”

But locals say that the bureaucratic delays were compounded by fatal negligence on the Epomeo Mountain, which hovers above the town.

The terracing and draining systems of the mountain’s forests should safely channel rain from the mountain to the sea. But they haven’t been maintained. Local hunters said the slopes had become cluttered with tree branches, leaves, rocks and even home appliances. Millions of euros have been set aside for maintenance just in the past 10 years. But a lack of political will, administrative personnel and expertise has prevented the funds from being used.

“I remember workers routinely cleaning up the canal underneath the street here when I was a boy,” said Antonio Senese, 47, who runs the family’s car rental and hearse business that lost vehicles worth almost 300,000 euros, about $315,000, in the disaster.

“Farmers and authorities cleaning up the mountains,” he said. “None of that exists anymore.”

On the night of the landslide, mud pounded Via Celario and Via Santa Barbara, the most damaged residential streets, washing away about 10 homes. Within them, four children slept. The youngest, a 22-day-old infant, was found dead in his dead mother’s arms. Three other children were found dead near their beds.

A young woman was still missing this past week, even as a rescuers sifted debris — mattresses, wooden drawers, and a stroller’s wheel — and mud from a home.

“It was similar to an avalanche,” said Paolo Parlani, the firefighters’ coordinator. “We think that the missing are somewhere under this rubble, but they could also have been dragged down the hill by the force of the storm.”

He gently reassured the family who had been standing by the search site for days, that the firefighters would do anything they could to retrieve the young woman’s body. On Friday, they were working under the rain to keep that promise.

“I heard a loud rumble in the distance and then the street’s lights went off,” said Teresa Silvestri, 76, Mr. Senese’s mother.

“The rain streaming down turned black and we saw the news stand passing by, and my new white Panda,” she added, referring to her car, a Fiat. “I had never seen anything like that.”

Ms. Silvestri lives on the top floors, so her apartment, closer to Casamicciola’s water front, was spared. But mud filled the basement and ground floor where the family has offices and garages. Even the garden’s cement walls came down onto the street.

On Friday, the authorities ordered the evacuation of her street and the surrounding area for fear that rain forecast for the weekend may stir more landslides.

At the Antiche Terme Belliazzi, an ancient marble hotel, the thermal baths were already inundated, leaving a chandelier hovering over a high mound of debris.

The spa’s “mud therapy is under the mud,” said Alessandro Venza, the owner. “I mean, the mountain’s mud.”