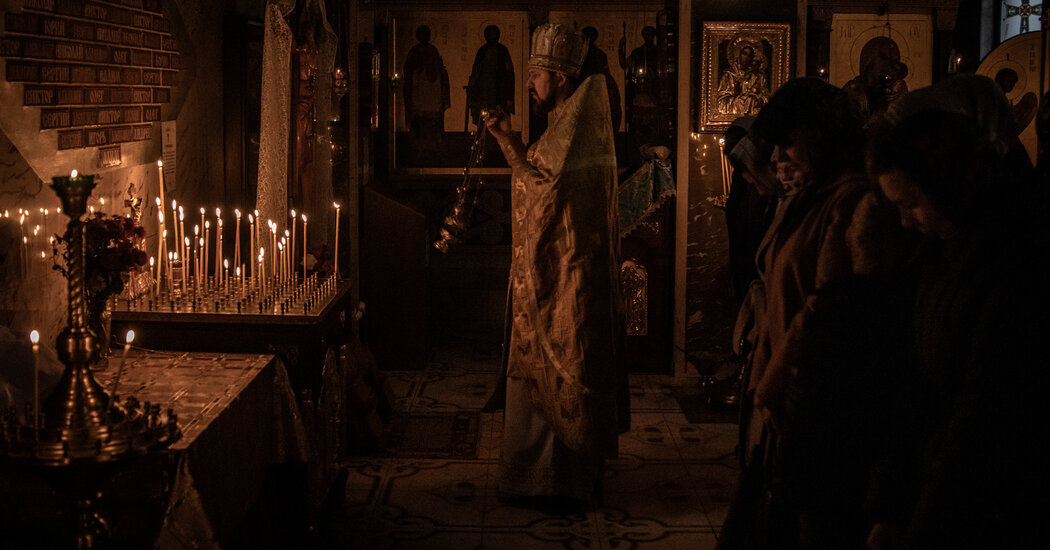 Ukraine’s president called for legislation to prevent an ancient branch of the Orthodox Church, led by a Putin ally, from operating in his country, but it remains unclear how that would work.

KYIV, Ukraine — President Volodymyr Zelensky of Ukraine called for lawmakers to prevent the branch of Orthodox Christianity that answers to Moscow from operating in Ukraine, taking aim at a powerful cultural force that Ukrainian officials accuse of abetting the Russian invasion.

His administration will draft a law “making it impossible for religious organizations affiliated with centers of influence in the Russian Federation to operate in Ukraine,” Mr. Zelensky said late Thursday in his nightly video address. In addition, he directed the government to conduct an inquiry into the Ukrainian Orthodox Church and its ties to Moscow, “and, if necessary, to take measures provided for by law.”

But he did not elaborate on how a new law would work — whether, for example, the church would be judged as one or parish by parish — and how it would be enforced. Several religious and legal scholars said it could face legal challenges, and without seeing more detail, they were not sure how the government would proceed.

Mr. Zelensky’s plans may be popular with an increasingly anti-Russian populace after months of Russian bombardment, but they raise hard questions about what it means to be a collaborator in a nation at war, and how a ban on the church would square with freedom of religion under the Ukrainian Constitution.

For centuries the ancient Ukrainian branch of the church has been subordinate to the Russian Orthodox Church, based in Moscow. The leader of the Russian church, Patriarch Kirill, has strong ties to President Vladimir V. Putin, whose long tenure he has called “a miracle of God,” and has endorsed the invasion.

But that branch of Orthodoxy is rapidly losing support, while many Ukrainians now adhere to a newer Orthodox church, based in Kyiv, created specifically to be independent and not answer to Moscow. There is little difference between the two churches in terms of religious practice or doctrine, but the divide between them on Ukraine and its identity relative to Russia is wide — and widening.

The State of the War

Officials in Russia were quick to condemn Mr. Zelensky’s move.

“The current Ukrainian authorities have openly become enemies of Christ and the Orthodox faith,” Dmitry A. Medvedev, a Russian former president and a top adviser to President Vladimir V. Putin, who has described Ukraine’s leaders as Nazis and satanists, wrote on Friday on the Telegram app. A spokesman for the Russian church, Vladimir Legoyda, wrote on Telegram that Mr. Zelensky’s proposal violated both international law and common sense.

Kyiv has long worried that Russia is using the Ukrainian Orthodox Church of the Moscow Patriarchate to provide cover for a network of clandestine agents trying to undermine Ukraine from within. The Ukrainian authorities have said that as of October, 33 priests had been arrested for assisting Russia since the invasion began in February, mostly by funneling information to Moscow’s forces.

The security services have questioned religious leaders and raided monasteries they said were suspected of harboring saboteurs and their gear — though they have not said if any were found — and have interrogated scores of religious leaders. They claimed to have found “literature that denies the existence of the Ukrainian people, its language, as well as the very right of Ukraine to statehood,” and videos have emerged of Orthodox priests chanting pro-Russian slogans.

But the Ukrainian Orthodox Church has called the accusations of collaboration between its clergy and Russia “unproven and groundless.” The church formally opposed the war and distanced itself from Moscow earlier this year, but is still under the jurisdiction of Patriarch Kirill in Moscow.

Sounding much like Mr. Putin, Kirill has argued that Ukraine is not a truly separate nation, that Russia has a legitimate claim on lands beyond its borders, and that the invasion is a justified defense against Western liberalism. In Moscow on Friday, he spoke of Donbas, the partly Russian-occupied region of Ukraine where the war for control still rages.

In his overnight address, Mr. Zelensky drew a parallel between the church split, and Ukraine breaking away from the Soviet Union in 1991 and its continuing struggle to be free of Moscow’s control. “Ukrainians will never again be gears of some empires,” he said and added, “We will never allow anyone to build an empire inside the Ukrainian soul.”

Ukraine’s Constitution guarantees “the right to freedom of personal philosophy and religion,” including the right “to perform alone or collectively and without constraint religious rites and ceremonial rituals, and to conduct religious activity.” But it also allows for restrictions on that right “in the interest of protecting public order.”

If Ukraine does outlaw a religious group, it would be among dozens of countries that have done so, but most are authoritarian states that are a far cry from the kind of liberal democracy Ukraine presents itself as being. The list includes Russia, which has proscribed the Jehovah’s Witnesses, among others, as extremists.

“We are not Russia, that can just forbid religious organizations,” said Ihor Kozlovsky, a theologian at the Shevchenko Scientific Society, a Ukrainian and American group based in New York.

The president’s declaration, he said, was meant to send a clear message to the church leadership to decide “if they are a church of the Ukrainian people” or advocates for the Russian worldview.

Nicholas Denysenko, a professor of theology at Valparaiso University in Indiana, said the Ukrainian Orthodox Church was struggling to occupy a “gray area.” It condemned the war in May, but has not repudiated the leadership in Moscow.

The government, Mr. Denysenko said, is saying, “You really need to decide whose side you’re on.”

About two-thirds of Ukrainians identify as Orthodox Christians in public opinion surveys. That figure has not changed much in decades, but the breakdown has, with steadily fewer people stating allegiance to the branch directed by Moscow, a growing number adhering to the independent Ukrainian church, and many calling themselves simply Orthodox, without naming a branch.

The shifting allegiances have significantly diminished the flock under the Russian Orthodox umbrella, much of which historically has been in Ukraine. Russians are, on the whole, less likely than Ukrainians to identify as religious and as Orthodox.

In 2019, international Orthodox leaders formally recognized the Orthodox Church of Ukraine as independent, a move bitterly opposed by the Russian church. Thousands of parishes have switched allegiances to the new branch, though thousands more remain loyal to Moscow.

In April, a survey found that 74 percent of Ukrainians wanted the Ukrainian Orthodox Church to cut its ties with Russia, and 51 percent wanted that church banned.

The Orthodox churches in both countries share the same religious rituals, abide by the same creed and trace their origins to the same event in 988, in Kyivan Rus, the east Slavic state that both Russia and Ukraine consider the root of their modern countries. In that year, Grand Prince Volodymyr — Vladimir to Russians — of Kyiv, a pagan, converted to Orthodox Christianity.