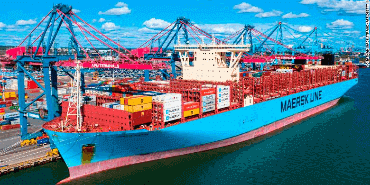 London (CNN Business)Maersk says it will launch the world's first carbon neutral cargo ship in 2023, as efforts to clean up one of the planet's worst polluting industries gain momentum.

The world's largest container shipping company said in a statement on Wednesday that the vessel will operate on methanol produced from renewable sources or sustainable biomass. It will be able to sail distances of over 4,000 nautical miles, a spokesperson told CNN Business. That's roughly the distance from London to Miami.

Maersk (AMKAF), which is based in Denmark, said the breakthrough had been achieved seven years ahead of schedule. The company said that every ship it buys in the future will come with dual fuel technology that enables ships to be either carbon neutral, or to run on fuel oil that contains less sulfur.

"Our ambition to have a carbon neutral fleet by 2050 was a moonshot when we announced in 2018. Today we see it as a challenging, yet achievable target to reach," said CEO Søren Skou. "Our customers expect us to help them decarbonize their global supply chains," he added.

There are a couple of catches, however: Maersk may not be able to secure enough carbon neutral methanol to use on its new ship, and the technology can only power smaller vessels for now.

Maritime emissions pose a huge threat to the climate. Ships used to transport goods accounted for about 2.5% of global greenhouse gas emissions in 2018, according to the International Maritime Organization (IMO), roughly equivalent to aviation. That was an 8% increase on 2012.

The biggest challenge for the shipping industry is moving away from heavy fuel oil, a type of diesel used by most of the world's tankers and cargo ships.

The IMO aims to cut annual greenhouse gas emissions from international shipping in half by 2050, compared to their level in 2008. The UN body has required progressive energy efficiency improvements for new ships since 2011. In November, it agreed further regulations to cut the carbon intensity of existing ships. These will be put forward for formal adoption at a meeting in June.

Separately, new curbs on sulfur in fuel oil that came into effect at the beginning of last year caused a 70% reduction in total sulfur oxide emissions from shipping compared to 2019, the IMO said in a statement last month.

Maersk said that about 100 of its largest customers, which include carmakers, retailers and consumer goods companies, have set or are in the process of setting carbon emissions reduction targets for their supply chains.

But there are still major questions about how to power any new ships ordered by Maersk. Using the largest methanol-powered engine currently available, Maersk said that the vessel it is building will be about 180 meters (197 yards) long with a capacity of 2,000 containers. The biggest ships in its existing fleet can carry around 20,000 containers and are 400 meters (437 yards) long.

"It will be a significant challenge to source an adequate supply of carbon neutral methanol within our timeline to pioneer this technology," said Maersk's head of fleet and strategic brands, Henriette Hallberg Thygesen. Success will require collaboration with fuel manufacturers, technology partners and developers to ramp up production, she added.

The company said it is also exploring alternative fuels for new vessels, such as ammonia, a gas composed of hydrogen and nitrogen.

Some scientists have questioned whether biofuels, such as the biomethanol that Maersk plans to use, are a sustainable replacement for fossil fuels in high consumption sectors such as shipping and aviation.

The Intergovernmental Panel on Climate Change said in a 2019 report that mass adoption of biofuels is not the answer to the climate crisis because of the land it uses, which could increase water scarcity and threaten food security.

Maersk is "ignoring the basic science that biofuels cannot be a scalable solution," said Faig Abbasov, shipping program director at European climate lobby group Transport & Environment. "You can produce it in small quantities but if you want to scale up you will not be able to do so because there is limited feedstock," he told CNN Business.

Read the original story on CNN