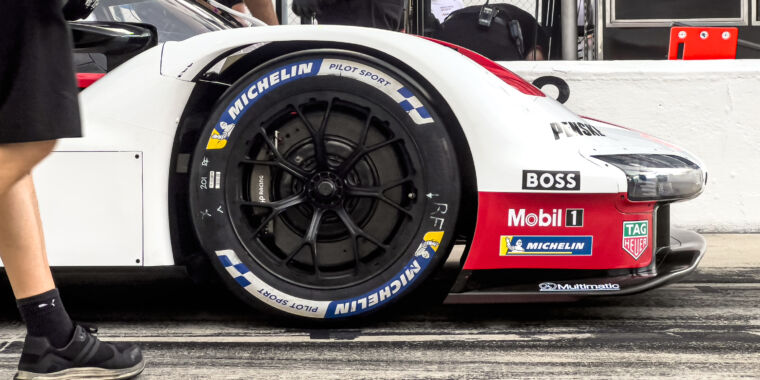 DAYTONA BEACH, FLA.—Car companies like to keep new models far from prying eyes during the development process. That goes doubly so when they’re going racing, like Porsche is with its new 963, which made our invitation to watch the car test on Friday, while still in development, a rare chance to watch expertise at work. Doubly so considering that Porsche's partner with the 963 is Penske Racing, an organization that has racked up more than 600 wins across a range of disciplines over the past 56 years.

The 963 has been built to win the 24 Hours of Le Mans and endurance races like it and will compete next year in IMSA's new GTP category as well as the FIA WEC's Hypercar class. Built to a rule set known as LMDh, it's more of a collaboration than the Porsche crest on the nose might lead you to expect. Multimatic in Canada provides the car's carbon-fiber spine, or chassis. Xtrac supplies the transmission, Williams Advanced Engineering provides the lithium-ion traction battery, and Bosch is responsible for the electric motor/generator unit, all three of which are tightly packaged together.

But Porsche has built the twin-turbocharged 4.6L V8, which traces its roots back to the mid-2000s RS Spyder race car, with a road-going derivative also found in the 918 Spyder hypercar. Power is capped at 680 hp (500 kW) for the internal combustion engine and hybrid system working together and is measured by sensors to ensure no one gets over-creative.

Porsche also designed the bodywork, which generates less downforce than you might think, so lap times might be a little slower next year. And the team—Porsche Penske Motorsport to be formal—is in charge of integrating all the various systems together such that it forms a fast and reliable car that can win races.

"As race cars evolve, they're getting more complicated, not less," said Jonathan Duguid, managing director of Porsche Penske Motorsport. "A hybrid powertrain is more complicated. But that's also why we partnered with Porsche and formed Porsche Penske Motorsports, because the experience that [Porsche has] as a manufacturer developing hybrid road cars, hybrid race cars, and the Formula E Championship, it helps shortcut that process, and we can rely on the resources and everything they have," Duguid explained.

That previous hybrid race car was the 919 Hybrid, a triple Le Mans winner capable of F1-levels of performance when unshackled from the strictures of the rulebook. It also required an F1-level budget to build and operate, something that LMDh has been designed to significantly reduce. Even so, it's not easy running.

"It's probably less complex than the 919, but with all the suppliers... that makes it basically more complicated," said Urs Kuratle, director of factory racing LMDh at Porsche. "The 919 was everything in-house, an in-house team. But now we have so many partners—the hybrid partners—actually operating on two continents, having customer teams as well in 2023 already, so that makes it all, under the bottom line, more complicated. More complex," Kuratle told me.

We arrived at the track by 8 am. It felt a little strange being at the Daytona Speedway when it was deserted—it's unusual even for the teams, since testing is so rare here. A crew of about 10 fussed over the car in one of the garages, preparing it for the day ahead. Without its wheels and on stands, it looked vaguely aquatic—likely the bill-like nose at work on the pattern-recognition bit of my brain.

A puck of LEDs on the roof lit up red to indicate the car's high-voltage system was live and not safe to approach. Then it turned green, and the 963's minders continued to fuss over it. The engine fired for the first time that morning, and mechanics peered into the engine bay with flashlights, looking for signs of anything unusual as the engine was revved. It was like watching an athlete limber up from cold, but with a lot more bass.

Still missing its wheels, the rear brake discs spun as the engine and transmission were warmed. At the rear, an occasional faint wisp of smoke emerged from the oil catch tank. The engine bay, which we were not allowed to photograph, was an array of neatly run wiring and intricately constructed components in cast metal and carbon fiber. It was less cramped than I expected, with as much volume dedicated to managing the 963's cooling as the engine, transmission, and hybrid system themselves.

Before the rear bodywork went back on, the corner workers came over and were given a safety briefing with instructions on how to handle the hybrid system should something untoward occur on track. With that out of the way, and with its bodywork on, the 963 was pushed to the pit lane.

Just before 10 am, as the track was about to go hot, the ever-darkening clouds finally released some of their moisture. It did little to cool the day but meant the team needed to erect an extra pop-up and ready a stack of wet tires for the car. Watching the team at work, everyone pitches in, even the boss. Within a few minutes the sky was clearing, but a flash of lightning in the distance meant nothing could happen for the next 30 minutes.

Would the weather cooperate? Each time a 30-minute lighting hold was about to expire, another flash in the sky reset the clock by another half hour. Still, it afforded an opportunity to speak with Roger Penske, who had also made time to watch his new Porsche 963 run. Although his 600-plus wins have been achieved across a broad spectrum of the racing world, it's clear that sports car racing, and Porsche in particular, holds a special place.

"When you think about success we've had over the years it really started with me, driving an RSK Spyder you know, back in my early days, and that went on to create a relationship with Porsche. We had initially Porsches for the International Race of Champions, where we had Formula One drivers, NASCAR drivers, sports car drivers, from all over the world, competing," Penske said.

From there, the team was chosen to run the 917/10 and 917/30 race cars—Porsche's first real experiments with turbocharged engines. More recently, there was the aforementioned RS Spyder, which battled memorably against the diesel Audis in the American Le Mans Series in the late 2000s. Penske even got behind the wheel of his RS Spyder last year at Goodwood, but the 963 has the ability to do something the RS Spyder couldn't: get the overall win at Le Mans.

But to do that, it needs to be reliable. And to do that? "Mileage, as much as possible," Kuratle told me. "Ideally, we have 30,000 [km] under the belt; that will be nice to sign off the bits and pieces," he said.

Eventually Thor or perhaps Zeus got bored flinging lightning bolts, and at 11:28 the 963 pulled away with an electric motor squeal—the bassy V8 only firing up at the end of the pit lane. The Porsche is quickly joined on track by rivals from Cadillac and Acura, neither particularly thrilled about having a bunch of journalists in the house.

The cars looked a little slow out there as they circulated with no traffic to contend with, but the early laps are for shaking things down and bedding things in. Over time we could hear Porsche driver Matt Campbell increase the pace in the 963, using more revs and carrying more speed through the corners. Each time the car returned to the pits you'd notice someone polishing, removing dirt from a leading edge or cleaning off a grease smudge. Penske earned a reputation decades ago for immaculately prepared cars, and it's a reputation it both deserves and maintains.

By mid-afternoon the rain had properly arrived, as evinced by the puddles appearing around the circuit. On treaded wet weather tires, the 963 wriggled its hips as it transitioned between surfaces on the pit lane, still just on electric power alone. Rooster tails appeared behind the cars as their tires pumped water back into the air.

And then, it was time to head home—for me at least. For the Porsche Penske Motorsport team and the 963, the test would continue until 10 pm. And then another 12 hours running on Saturday, bringing the 963's accumulated test mileage to 10,289 miles (16,559 km). As you might expect, more tests await between now and the car's racing debut at next January's Rolex 24 at Daytona.