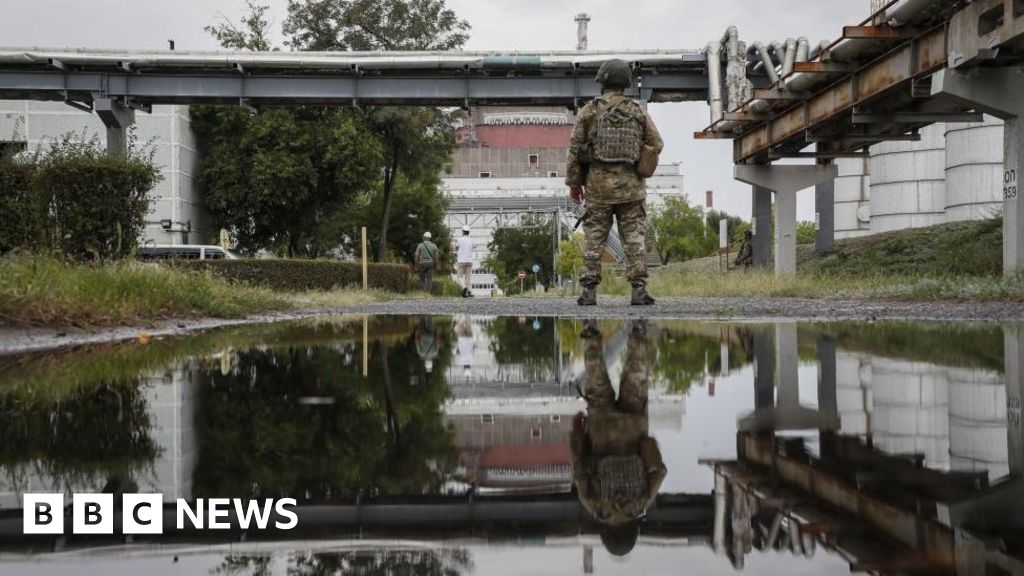 Shelling of Europe's biggest nuclear power plant could lead to unlimited release of radioactive materials and Russian military equipment on site could undermine its security, the UN's nuclear agency has warned.

Russia occupied the Zaporizhzhia plant at the start of its invasion of Ukraine and it has come under repeated attack.

After a visit last week, UN's nuclear watchdog has called for a safety and security protection zone.

It said shelling must end immediately.

The plant lies on the southern bank of the River Dnieper, across the water from Ukrainian-held towns and military positions.

Both sides have accused each other of targeting the plant, occupied by Russian forces in early March. On Tuesday, Russia accused Kyiv of hitting the area three times in 24 hours. Ukraine says Russia forces have used it as a shield from which to fire on nearby cities, although Russia insists they are guarding the site.

However the UN's International Atomic Energy Agency is careful not to apportion blame to either side.

Shelling continued while a 14-strong IAEA team visited the site last week and its head Rafael Grossi warned at the time of a very real risk of nuclear disaster. Although the team left the plant after two days, it said two of its officials would remain there on a permanent basis.

In its report released on Tuesday, the agency highlighted the "extremely stressful conditions" facing the 907 Ukrainian staff working there under Russian military control. It said the depleted staff should be entitled to family support and an appropriate work environment.

The IAEA detailed the damage to the plant and said while continued shelling had not yet triggered a nuclear emergency it did present a constant threat to safety that "may lead to radiological consequences with great safety significance".

There was an urgent need for "interim measures" to prevent a nuclear accident caused by military action, it added, saying all relevant parties would have to agree to a "nuclear safety and security protection zone" being set up to avoid further damage.

Russian military, vehicles and equipment were seen around the plant and "several military trucks" were inside the turbine halls of two of the plant's six reactors, the agency said.

It warned that military equipment on site and clashes near vital areas undermined the plant's protection system and it called for the removal of vehicles that could interfere with safety systems.

The watchdog said staff had to secure permission from the Russian military to visit cooling ponds at the plant and it criticised the presence of nuclear officials from Russia's nuclear body, Rosatom. That could lead to possible friction when key decisions had to be made, it said.

Although it has six reactors, the Zaporizhzhia plant has only had two operating since the war began and just one reactor has been working in recent days.

Three of the four lines providing power from Ukraine's grid have been put out of action during the fighting and on Saturday the UN watchdog said the last line had also been disconnected, leaving just one lower-power reserve line from a nearby thermal plant.

Ukrainian officials said on Monday that the last working reactor was disconnected from the grid after the last main power line went down.

More on this story